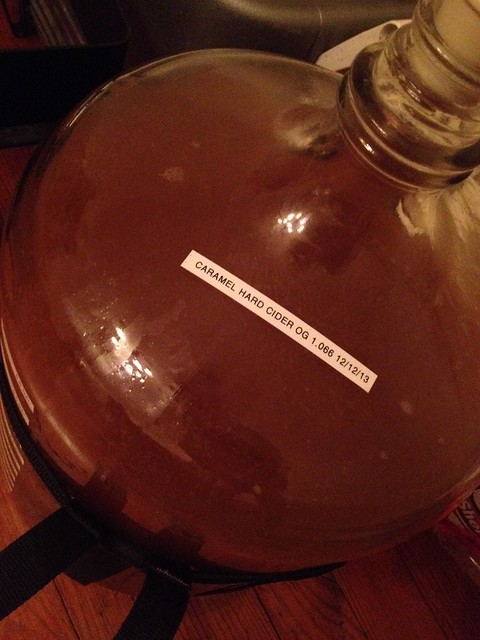 Back in December I made a hard cider using fresh Honeycrisp cider from a local orchard. I don’t remember the name of the orchard but I got it through Keystone Homebrew which is a good place to get local cider when it’s that time of the year. A++ recommended, would buy again.

Making hard cider is actually pretty easy. It’s like brewing beer except for the part where you brew the beer. Basically you just add the cider to a carboy or bucket (or whatever container you want, but it should be something food safe) and then add yeast and wait. The yeast eats most of the sugar and you end up with a dry cider. I guess there’s probably some cider yeast you can use that will leave it a little sweet but I didn’t do that. For the primary fermentation I also added some brown sugar to try to get some caramel-y flavors and to bump up the ABV a bit (more sugar = more alcohol).

I made a 6 gallon batch so it was too much to fit into a single 5 gallon keg. I bottled about a gallon and a half and put the rest in a keg with some apple juice concentrate and a brown sugar and cinnamon syrup to make it a little sweet. The bottled cider will be pretty dry without the addition of any more sugar (other than priming sugar). In the remaining 5 gallons I added some potassium sorbate to inhibit any further fermentation. Without that the yeast would start eating the sugar again and I would just end up with a stronger dry cider. Actually I probably could have gotten away without it since the keg would be at fridge temperature, which will also prevent fermentation but it’s proabbly safer to add the potassium sorbate in case I decide to bottle any of the kegged cider later.

I’m not sure how much of an effect the brown sugar will have, especially in the bottled cider. Sometimes those kind of additions end up being too subtle. Or they can be too much. You never really know until you try. Based on similar recipes I think I’m at a good starting point. If it ends up not being as prominent as I want I can always add more in a future batch.